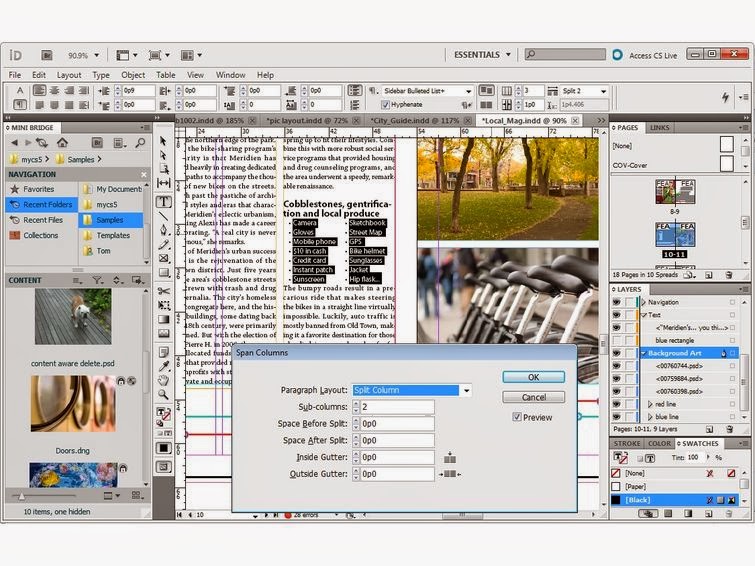 The design of a page can say as much as the words on it. Visual design couldn't be more crucial in an age when people read more than they ever have beforeon computer screens, smartphones, iPads and tablets, Kindles and e-readers.

Adobe InDesign has been the leading page designing software for at least five years in part because it hasn't neglected the digital side of the publishing world. Its most recent release, ($699, direct; upgrades from $119), is the first point release for the product in a very long time, but that has more to do with how Adobe is restructuring its release cycles than what's included in the upgrade. InDesign CS5.5 contains a number of improvements that are significant to anyone who exports pages to digital platforms. Other new but more general features aren't wildly exciting, although they may pique your interest if they hit on specific tasks that you routinely perform in InDesign, like using anchored objects or designing pages with dozens of layered elements that get sandwiched in the pile and become difficult to grab. InDesign has never been a tool for casual users. It's really for pros, which is why the $699 price shouldn't sticker-shock you into a heart attack.

But Adobe this year added a new option for licensing InDesign on a monthly subscription basis ($35 to $49 per month), a much more appealing offer if you need it semi-professionally, perhaps as a student or start-up business, but for only a short while. InDesign is also available as part of the Adobe Creative Suite 5.5 Design Premium package ($1,899) and Master Collection ($2,599). Tried-and-true InDesign users can upgrade from the previous version for $119, or most earlier versions of the software for $199.

Improvements No InDesign upgrade would be complete without some improvements to exporting capabilities, but more than ever before, CS5.5's improvements focus on online publishing. These improvements related to exporting files to HTML and the EPUB export workflow, which helps publishers make e-books and adapt content for iPads and other tablets. InDesign CS5 users had access to a set of tools (external to InDesign) used to add interactivity to page layouts and create.folio files that are consumed by the hosted services included in Digital Publishing Suite. In CS5.5, however, these tools (now called Folio Producer tools) are now included as part of the InDesign CS5.5 installer and are no longer separate plug-ins. They're directly accessible as panels within InDesign. Squid Proxy Windows Activation more.

Another improvement made to the exporting capabilities is much more control over how images are exported to EPUB, letting you adjust how much whitespace each image should have, as well as file size, image resolution, and alignment. Support for PNG files was added, too. Publish date metadata values are now automatically inserted into the exported files, alongside other pertinent data (since CS5 or earlier) attached to the file such as author name and title, keywords, and copyright information (under File >File Info). Adobe also made some improvements so that the resulting EPUB can actually pass validation in some tools, such as the open-source EPUB Checker. HTML5 fans will be happy to hear that audio and H. Skype For Samsung Galaxy S Gt-19000 here. 264 video files placed in documents for e-publishing will now get tagged appropriately without hand-coding.