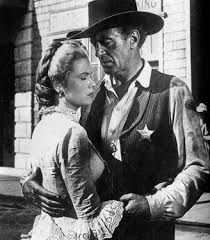 Synopsis This Western classic stars Gary Cooper as Hadleyville marshal Will Kane, about to retire from office and go on his honeymoon with his new Quaker bride, Amy (Grace Kelly). But his happiness is short-lived when he is informed that the Miller gang, whose leader (Ian McDonald) Will had arrested, is due on the 12:00 train. Pacifist Amy urges Will to leave town and forget about the Millers, but this isn't his style; protecting Hadleyburg has always been his duty, and it remains so now. But when he asks for deputies to fend off the Millers, virtually nobody will stand by him. Chief Deputy Harvey Pell (Lloyd Bridges) covets Will's job and ex-mistress (Katy Jurado); his mentor, former lawman Martin Howe (Lon Chaney Jr.) is now arthritic and unable to wield a gun. 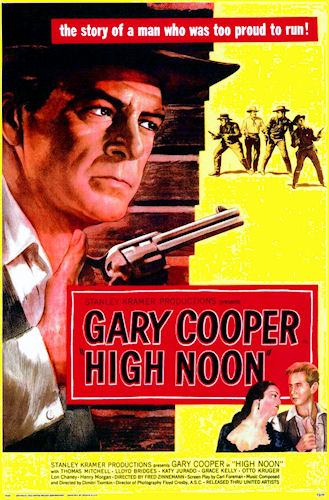 Even Amy, who doesn't want to be around for her husband's apparently certain demise, deserts him. Meanwhile, the clocks tick off the minutes to High Noon -- the film is shot in real time, so that its 85-minute length corresponds to the story's actual timeframe. Utterly alone, Kane walks into the center of town, steeling himself for his showdown with the murderous Millers. Considered a landmark of the adult western, High Noon won four Academy Awards (including Best Actor for Cooper) and Best Song for the hit, Do Not Forsake Me, O My Darling sung by Tex Ritter.