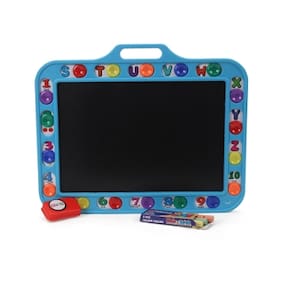 FIELD OF THE INVENTION The present invention relates to childrens' games, and more particularly to an enhanced game of hide and seek. BACKGROUND OF THE INVENTION In its most general form, the well known childrens' game of hide and seek is played by a plurality of children, one of whom is designated as the seeker (commonly referred to as 'IT'), and the remaining children being designated as hiders.

The seeker remains at a predesignated location (generally referred to as 'home base'), covers his or her eyes and begins counting to a predetermined number while the hiders depart from home base and attempt to find suitable hiding places in which to hide from the seeker. Upon counting to the aforementioned predetermined number, the seeker announces that he or she is commencing to search or seek out the hiders in their various hiding places (i.e. By yelling an appropriate warning such as 'ready or not, here I come!' While the seeker is searching for the hiders, individual ones of the hiders endeavour to return to home base.

Upon discovering one of the individuals in hiding, both the seeker and the hider race towards home base. In the event that the seeker reaches home base before the hider, the hider becomes the new seeker and calls in the remaining hiders to return to home base (i.e. By yelling 'all ye all ye in come free!' Thereafter, the game begins again with the new deignated seeker counting to the predetermined number, etc.

In the event that the hider reaches home base before the seeker, the hider is considered 'safe', and the seeker continues searching for the remaining hiders. In the event that all of the hiders return to home base without being caught by the seeker, the game re-starts with the same designated seeker. DESCRIPTION OF THE PRIOR ART Many prior art radio signalling systems have been developed for use in novelty devices such as games, range finders, etc. 4,173,016 (Dixon) discloses an inter-personal introduction signalling system wherein at least two persons may communicate via radio transceivers using a code system for defining a plurality of categories, each of which has a particularly identifiable characteristic. Each person carrying a transceiver can select a particular code to send and a particular code to accept, such that designated information is transmitted and/or received. Thus, the transceivers of Dixon may be used to implement a system of introducing people to each other by matching remote calls and responses based upon the preselected code sequence.

4,297,701 (Henriques) teaches a portable range finder for use by golfers, in combination with a plurality of flagstick units located at a golf course as well as a master club house unit. Descargar Crack Para Age Of Empires 3 Gratis. Each hand-held unit includes a power source, a transceiver, a distance determining circuit, a keyboard with display, an audio generator and a microprocessor which controls the mode of the hand-held unit.

To determine the distance between a hand-held unit and a flagstick unit, a button on the keyboard is depressed to select a particular flagstick unit. The distance determining circuit is in the form of a timing circuit which measures the amount of time required for the signal from the transceiver to reach the selected flagstick unit and be re-transmitted by the flagstick unit back to the particular hand-held unit. Accordingly, a golfer using the range finder of Henriques is provided with an indication of distance. The flagstick units may also be programmed to send an identification code bit after the transmitted signal so that the master club house unit receiving this identification signal may analyze the signal for determining the location of particular golfers or other information. 4,023,167 (Wahlstrom) teaches a system in which bursts of radio frequency are transmitted to excite and thereby detect the presence of passive resonant circuits. If a circuit is resonant at a particular burst frequency, it is excited, rings and emits a radio frequency signal.

Following each transmitted burst, a receiver is turned on to receive energy emitted by the resonant circuit so that if a resonant circuit is excited, its emitted energy is received and the particular resonant circuit can be identified. 3,790,948 (Ratkobich) discloses a radio transmitting hunting arrow to aid in locating wounded game. The antenna for the transmitter is carried by the hollow shank of the arrow. A radio receiver, carried by the hunter, is tuned to the signal frequency of the transmitter and has a directional antenna and means for finding the direction of the transmitter. 3,336,530 (Sloan et al) teaches a direction finding system for hunting dogs, comprising a miniaturized transmitter suitably affixed to and carried by a dog collar. An omnidirectional antenna is also suitably mounted to the dog collar so as to extend vertically upward. The antenna is connected to the output of a transmitter which radiates electromagnetic waves substantially uniformly in all directions.