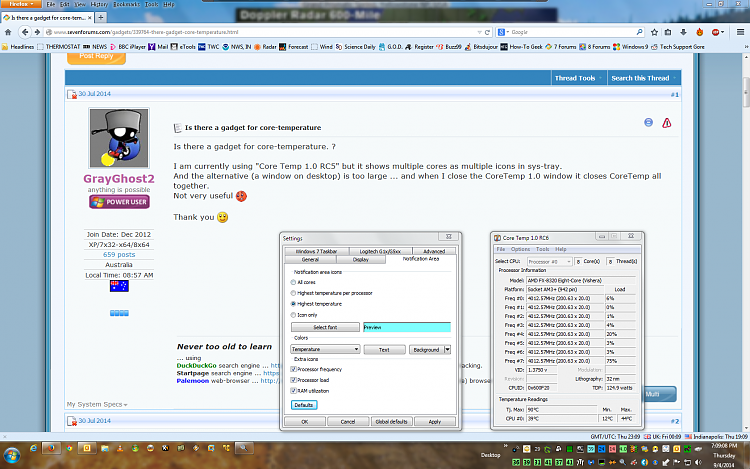 A guy came in the chat earlier asking about how to show your cpu temp while in game. Which prompted me to write this tutorial on how to achieve this. There may be other methods and programs. Maybe even better methods.

While Rivatuner will show you CPU usage and load as far as I know it doesn't by itself show cpu temp. So lets get down to the nitty gritty.

Required Download Rivatuner: Download RealTemp plugin: 1: Install Rivatuner. 2: Copy the files ( RTCore.cfg,RTCore.dll,RTCore.rth) from the RealTemp download to your RivaTuner v2.24 MSI Master Overclocking Arena 2009 edition PlugIns Monitoring folder. (If you downloaded and installed the Rivatuner above). Instead of typing out the rest of the steps simply watch the video below I recorded to make it easier. Also watch it in HD and full screen. So you can see the text and options I set. Hope it works for you!

Owcraftsman It should be noted the Riva Tuner is already running in your system tray if you use EVGA Precision or MSI Afterburner and setup will be different. With either installed you will not be able to install RIVA the 1st app linked in the OP and I believe the files RTCore.cfg, RTCore.dll, RTCore.rth are included with the EVGA & MSI apps correct me if I'm wrong. I use my G15 display personally but this is a nice toot for those that don't have one. Good job and thanks for sharing this fattysc! RTCore.dll and RTCore.cfg files included in Precision and MSI Afterburner are totally different then the RealTemp files necessary for this plugin.